I know everyone is obsessed with the gloom and doom of the economy, but we must all take into consideration that businesses come and go for lots of reasons other than economics, namely the internal fortitude of the owners, having owned a small business, I know how tough it is to keep up the enthusiasm.  More often than not, it is lack of motivation and good planning that leads to lack of money.  That said, people are opening businesses all the time in Charleston and I snapped this picture of Ami Murphy yesterday as she arranges products in her new, soon to open shop on Cannon St.  This adorable shop in an vintage 20’s shoe store is a must see, and I can’t wait to go spend some time picking out cards to send friends at their writing station. 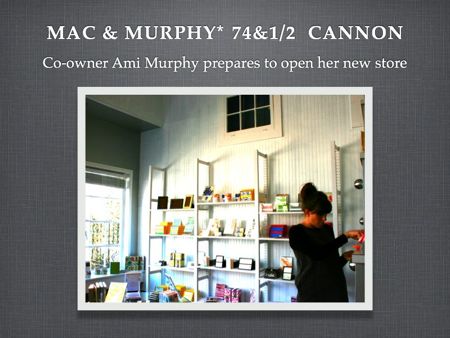 In the February 18 issue of the Charleston City Paper, Erica Jackson interviewed Chris Price of the PrimeSouth Group. (Click here for the complete article)

“Is King Street losing its luster? I don’t think so whatsoever,” says Chris Price, co-founder and principal at the Prime South Group.
“…All the tenants that are leaving Upper King Street … look what they’re being replaced with. They’re being replaced very quickly with higher-end, better-funded retailers and restaurants. Artist and Craftman is being replaced by Halls Chophouse, a high-end steakhouse. Wonderland’s space is already home to SIG, a bathroom and kitchen fixtures store that has moved from West Ashley. And Abmey & Company was replaced with SieMatic, a German-based kitchen outfitter. Other businesses joining the area include a restaurant called Shine and Mac & Murphy, a paper company.
“When you lose a wonderful tenant and a fine two-story arts store, and you replace that with a first-class chophouse, Halls Chophouse, the level of tenant has dramatically increased.
“Let me give you an example,” Price says. “Halls. It’s a mom and pop operation, banking with a local bank, using a local contractor. They are locals, they live here. That’s what people do not see. They see a new steakhouse coming in and they think, it’s some rich guys from New York. But that’s not the case. They are local people. It’s not a typical chain store coming in and losing the local flavor, the local identity. And that is phenomenal.”
Price predicts that the upscale design trend will continue to take over the area.
“It’s not just Upper King Street, it’s downtown Charleston, it’s the region,” he says. “People are coming to Charleston to shop for things they can’t get anywhere else … It’s becoming more of a destination shopping/design area and that’s wonderful for the community as a whole.
“I love the diversity up here,” he adds. “You can eat, you can shop, you can go and design a new kitchen for your home, and you can have that glass of wine, or you can go to the ballet and walk out and go to Chai’s to have a nightcap. It’s just a very unique environment that needs to be built upon.”