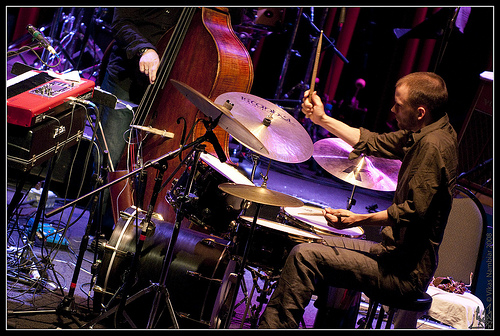 Acoustic Jazz is back at Eye Level Art

Billboard Magazine called them “Generation Next”, they’ve played Lincoln Center and Kennedy Center, and on September 26, Michael Bellar and the AS-IS Ensemble come to Eye Level Art’s 103 Gallery to melt the crowds with their hip electro-acoustic jazz style.

The ensemble isn’t your traditional jazz group. As the former house band at the legendary Blue Note club in New York, Michael Bellar and the AS-IS Ensemble have perfected their own brand of jazz. The ensemble combines multiple musical textures and influences (including even Led Zeppelin and Bjork) resulting in the unexpected sound of Michael Bellar and the AS-IS Ensemble.

See Michael Bellar and the AS-IS Ensemble Saturday, September 26 at the Eye Level Art’s 103 gallery on Spring St. Doors for the concert will open at 8pm. Tickets are available online on Eye Level Art’s website for $8 and will be $12 the night of the show at the door. Student tickets are only $8 with a valid student I.D.

About Eye Level Art:
Eye Level Art offers a wide collection of contemporary art from local and national artists. We exhibit from our industrial Warehouse gallery at 2143 Heriot St. and our new 103 gallery at 103 Spring St. Located on the edge of the peninsula, the ELA venues offer the Charleston art scene a unique and creative alternative to the more traditional art venues. Both venues host art shows, music events and the opportunity to rent the space out for personal events. Contact mike@eyelevelart.com if interested in renting either the “Warehouse” or “103”.