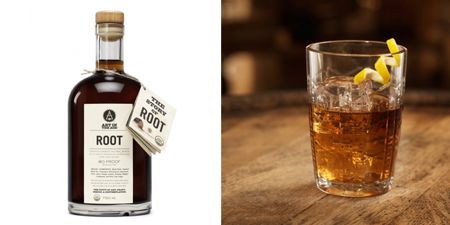 Recently we caught wind of a new liquor based on the extremely alcoholic and very old recipe (circa 1700) for root tea. The original brew was made with anise, cloves, and birch bark, and the modern version doesn’t stray too far. (For the record, root tea lost its punch during the temperance movement when a seemingly well-intentioned pharmacist took out the alcohol and created the root beer we all know today.)

We expected this so-called original root beer to be syrupy sweet and cloying at best. Instead, the taste combined all kinds of low, deep flavors, like smoked black tea, nutmeg, cardamom, and sugar cane. Then it finished light with subtle notes of citrus and spearmint.

The folks who developed Root suggest pairing it with a good dark beer or simply enjoying it neat. We think it would also be splendid drizzled over vanilla ice cream. Consider yourself warned, though: Each $39 bottle is 80 proof, and a little goes a long way.