The other day I was given a lift on Charleston’s newest craze in transportation, the downtown golf cart.  They aren’t even called golf carts any more, they are referred to as LSV’s (street legal low speed vehicles).  People who live on the peninsula can now go anywhere downtown due to the cities range rules.  The golf carts travel fast enough to easily keep up with downtown traffic and most of the newer models even come with seat belts, turn signals, head lights and hopefully radios.  In good weather, I can’t think of a better cruising vehicle.  It’s a great way to get quickly from A to B and the view is better, electric models are super quiet and parking is much easier.  I am researching the rules and regs as well as the tax credits. Apparently there is up to $4000 in tax credit available to purchase (read more) Overall, I want one, and I want others to have them too.  Charleston would be quieter, greener, and less congested if this trend catches on. 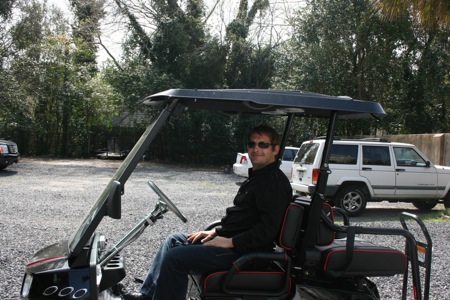