What do you do after purchasing the amazing church at 59 Piedmont in Wagener Terrace? I had been showing it for months, to pretty much anyone that I could talk into looking. I was captivated by the modern style and the cool lot with curving oak trees, not to mention the awesome downtown Charleston, SC location. The main turn off hit your nose the second you stepped inside. The roof had been leaking for years. Mold and must permeated the space, rotten wood showed through the ceiling and garlands of termite dust hung from the beams above the sanctuary. “This was going to be a big job” was the main comment heard from all my perspective buyers. Finally I cajoled my husband to take a look, surprisingly he liked it as much as I did. The rest is a work in progress. The first mission, stop the leaking, the second mission restore the building back to as close to original as possible. Despite two churches use of the building, most of the original fabric is still intact. We continue to search ebay for that missing retro fixture shade for the mens room, and several other odds and ends, but the result will be worth the wait. Once everything is put back together again, what then? We hope that part will reveal itself to us. Just stopping the water has been enough of a challenge! 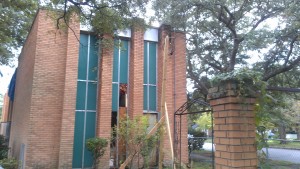 Verticle windows covered up will be replaced with originally intended stained glass and aluminum framing.

Existing stained glass on the west and east of the santuary remain almost in perfect condition. 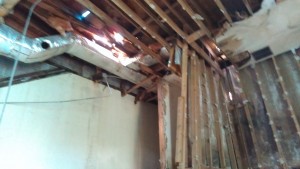 The worst leak at the nose of the sanctuary when all the rot was removed the hole was actually much larger than it appears in this photo. 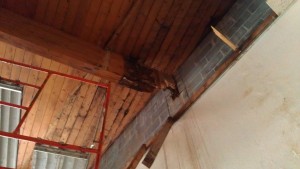 The gorgeous exposed wood and beam tongue and groove ceiling was plagued with failures due to unchecked leaks. Major structural repairs to the roof system were painstakingly made to preserve the original ceiling. 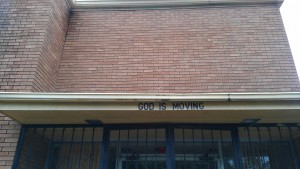 Since this photo was taken the metal guards over the entrance doors have been removed and a glimpse of clean mid century modern lines reappear.

A few places I have found with very similar design elements: 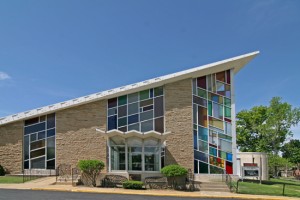 And click here for some wonderful photos of a mid century mall that has sadly been torn down: http://www.beltstl.com/2006/01/northland-shopping-center-artifacts/
click here for another article about the loss of this cool retro 50s mall.

I guess in Charleston Sc the architecture is all the rave, but no one is talking about mid century modern. That makes these vintage architectural gems a rarity that is hard for me to overlook! Stay tuned for more pics of the project at 59 Piedmont, Charleston SC